Daemons in the machine

Daemons in the Machine
at the Moscow Museum
of Modern Art, Russia

Jon McCormack recently visited Moscow to participate in this new exhibition on Art and Artificial Intelligence. Here he reflects on the exhibition and the concepts and ideas it explores.

A collaboration between the Moscow Museum of Modern Art (MMoMA) and LABORATORIA Art&Science Foundation, Daemons in the Machine is an ambitious and timely exhibition that critically examines the role of Artificial Intelligence in contemporary culture. Developed to coincide with LABORATORIA’s 10th anniversary, the title evokes multiple references – both historical and contemporary – to the myths, ghosts and demons that reside in the creations of human invention.

A diverse collection of works from nine international artists deeply probe the mythology, mistakes, glitches, ethics and possibilities of Artificial Intelligence. Some of the works were special commissions for the exhibition and in most cases developed in collaboration with scientists.

Central to the exhibition was the large scale work of Austrian artist Thomas Feuerstein. A three-act installation inspired by Dostoevky’s Demons, Tea for Kirillov invoked literal, allegorical and metaphorical references to demons in the machine. In the first room we encounter the ghost of Kirilov (the Engineer in Dostoevky’s story) by way of a mysterious desk that seems to be operated by an invisible spirit, visible only via a grainy security camera. This spirit opens draws and manipulates parts of the furniture, seemingly part-machine, part ghost. A series of electrical patch cables lead the visitor into the next room, where the cables grow thicker and become a tangled network of inky blackness that increasingly inform the overwhelming sculptural aesthetic.

Every now and then, the physical elements of the room pulsate and violently vibrate, emitting dark and ominous bass sounds and contributing to the overwhelming technical gloom radiated by the room. They are driven by the monitoring of cyber attacks, botnets and viruses being defended by one of the exhibition’s scientific partners, Kasperky Lab.

In the third room, two robotically empowered medical lamps, ‘Borgy & Bes’ engage in a futuristic language game as their neural networks, trained on Dostoevsky’s text, speak to each other like two infant children: using words that they have overheard from adults but of which they have no semantic understanding.

Jettisoning the current trend of repurposed tensor flow style-transfer images, the exhibition considers the deeper physical, conceptual and phenomenological aspects of the AI ‘revolution’. What ways can machines ‘think’ that aren’t founded on human mimicry? French artist, Justine Emard’s video installation Co(AI)xistence, depicts humans and robots in ‘unstructured interaction’ through touch, gesture, conversation and body movements with Japanese dancer Mirai Moriyama.  The work invites a consideration of how human and non-human intelligences can, in the sense of Heidegger, be in the world and undergo a gradual process of self-contemplation.

In a poignant reference to our increasing digital domestication, Dmitry Morozov’s (aka ::vtol::) ‘umbilical digital’ is a kind of electronic farm, where a herd of digital Tamagotchis are nursed by a machine. Traditionally a popular form of children’s toy (in the 1990s and early 2000s), Tamagotchi was an electronic talisman housing a virtual pet that grows from an egg. It required constant care and attention from its human ‘parent’ via a simple button interface. In the artwork, the role of the human is replaced by algorithm, shifting the conceptual context from domestic pet care to automated industrial-scale farming of nurture and kindness. The system optimises the nurturing of each Tamogotchi, continuously learning about how to better care for each and documenting its actions via a thermal printer. 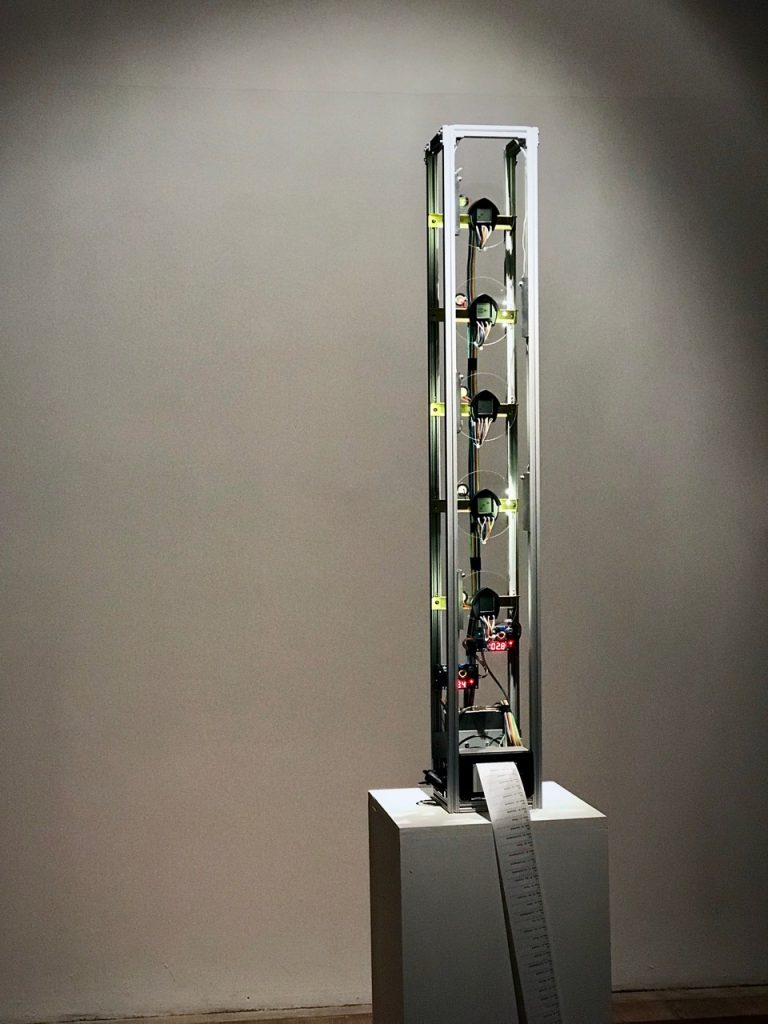 The exhibition also included an ‘Art/Science incubator,’ a kind of contemporary play space for collaboration at the intersection of the two cultures. In this space, my own work, Niche Constructing Robot Swarm presented a swarm of eight small robots (custom designed in SensiLab) who exist only to create drawings. Through cooperation and interaction, each tries to build its own ecological niche, based on a genetic preference for a specific density of lines. The work considers the idea of non-human forms of creative intelligence: entities that have their own inbuilt desires and methods for being creative that do not necessarily correspond directly to our own.

AI is currently riding at the peek of the hype cycle, coinciding with regular exhibitions of ‘AI art’ which too often tend towards conceptually simplistic manifestations of easily downloadable deep learning software. Daemons in the Machine takes a very different philosophical position, recognising the historical linage of human demons that were once mythological constructs of human tools but are now (literally) software processes. As the gut microbiome is to humans health, so these software demons are an integral part of modern computer operating systems.

Humanity often has difficulty in dealing with its demons, the crux of this exhibition is to invite us to embrace them. As we race headfirst into our AI techo-future, knowing those demons a little better will become inevitable.

Daemons in the Machine runs from 5th October until 11th November 2018 at the Moscow Museum of Modern Art, Petrovka 25, Moscow.

Niche Constructing Robot Swarm was commissioned by Laboratoria Art & Science foundation Moscow, and Jon’s visit to Moscow was made possible with the support of Laboratoria and the Australian Department of Foreign Affairs and Trade.